We exhibited in January at The 12th Annual Fit For Life Expo and, as usual, had some amazing experiences to share…

Besides the usual – aches, pains and stiffness finding relief, and the tired and weary getting a twinkle back in their eyes, and glow in their faces, we had three more noteworthy cases:

A young women, about 30, had been diagnosed by MD’s last summer with either rheumatoid arthritis or lupus. I know, right? That’s like saying you either have a cold or a flu. Would it be ethical for a drugopath to prescribe, if an accurate diagnosis eludes him? 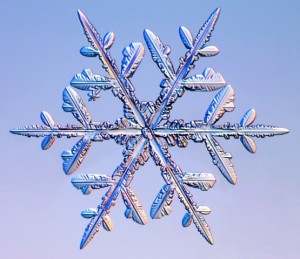 All snowflakes are made of water, yet no two are alike…

It just shows the limitation of The West’s reductionist view of disease. The first thing I learned while studying homeopathy is that you cannot separate the disease from the patient. It’s not happening to him or her, it’s happening because of him or her. For this reason, each ‘disease’ has it’s own unique presentment in every patient, like snowflakes in a meadow.

In the West, lupus or rheumatoid arthritis are viewed as processes happening to the patient rather than something generated by the patient. The name of the disease is a big deal in the West (the ‘diagnosis’). In natural medicine it means very little – in fact, it’s better to leave the collection of symptoms without a name, lest you buy into the view that you have ‘caught’ something and must now suffer all the usual outcomes that western statisticians have so carefully collected. 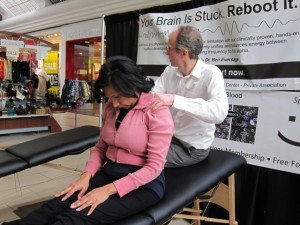 De-tensing participant prior to cerebral integration

Back to the Expo… The woman’s shoulders were so exquisitely painful I could not even lift her arms to do my standard exam. I delivered her the Alphabiotic Alignment and immediately got improvement. When she came back for her second ‘reboot’ she improved very remarkably – gaining nearly normal range of motion with little discomfort.

This was a patient that could never contemplate PT or exercise. What drugs could have produced results so quickly? As I look back, I believe she was already on several…

Another gentleman, around 60, said he had been seeing neurologists since October for profound weakness on the left side of his body, along with neck and chest pain. No one seemed to know what was wrong with him. As I was testing him to confirm he was in a stress state, he began to relate a long story about why he believed he had it. I politely interrupted and suggested no matter how convincing his story was, my opinion as to the cause would likely differ, and that, since he wanted to try Alphabiotics regardless, he should simply wait and see whose narrative was more accurate. One ‘reboot’ restored 100% of this man’s lost strength. He rose from the table with a big grin. Since he presently no longer had a ‘neurological disorder’ I earnestly invited him to alter the language he used concerning his state of health and discard the old paradigm of sickness and disease. 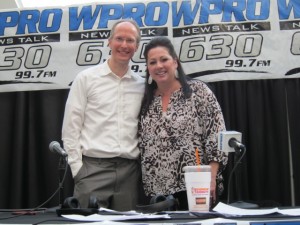 Interview with Tara Granahan of WPRO

Finally, a man of 45 years asked me about results I had seen for other private members of our association on depression. I related that I personally had been saved from this most grievous malady by Alphabiotics. A couple hours after his first reboot I saw him watching me work with a big smile on his face, talking to other bystanders, telling his story and how they had to try it too.

He left feeling so happy, in fact, that he gave my wife a great big hug and then, as he walked away he turned to wave with a smile.

That’s transformation. Moments like these make all the work worth it.

Unrelieved stress is a killer. Alphabiotics is the most effective way of dealing with its effects in a proven, verifiable manner.